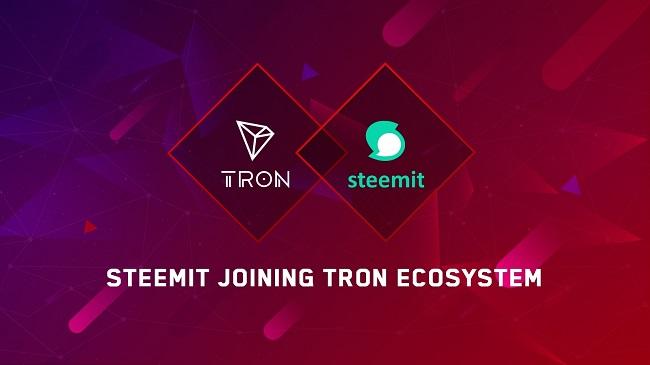 Blockchain-based social media and blogging platform Steemit has announced its plans to migrate to the TRON blockchain.

In a press release, Steemit announced its partnership with the TRON Foundation and said that it will immediately start working towards bringing Steemit and other Steem blockchain-based DApps to TRON blockchain and its community of over 20 million users, products, and services.

Importantly, Steemit will move its old STEEM token to a new TRON based STEEM token. It said that it will hold token giveaways to existing TRX users and launch a new accelerator program towards the developer community.

“Steemit is the original conception where forums meeting cryptocurrency was born -- where cryptocurrency could be distributed as easily as ‘likes’ and ‘upvotes’ and that maybe this would bring adoption and appreciation to the currency,” says Ned Scott, CEO, Chairman and Founder of Steemit. “From launching the platform in 2016 on a shoestring budget with an idealistic team to today, I’ve enjoyed the development of the platform and the growth of its user base — now I’m excited to see a strategic partner attempt to bring it to new heights.”

TRON, on the other hand, is known for its high throughput stability, and scalability. It has forged partnerships with some of the leading names in the industry including Samsung, Poloniex, Opera, and DLive.

“This partnership further empowers TRON’s title as the blockchain industry’s leader in distributed ledger technology with over 800 DApps now in its ecosystem,” the release said.

Welcoming Steemit to the TRON ecosystem, Justin Sun, Founder of TRON and CEO of BitTorrent, said, “Together we will usher in a new era of decentralized social networking.”

For options on how to get recovery of any funds lost to any of the options below;
1. Binary option scam?
2. Forex trading?
3. Romance scam
4. ICO Scams
5. Online betting scams
6. Bitcoin scam
7. Phishing scam
or any other kind of scam?

If in any case you have lost funds to them or any other. I have a good news for you. Scams Rescue is currently recovering funds for all victims. Service delivery is top notch and second to none. Hurry and contact them on email: wzardgarryspeedhack @ gmail dot com Whatsapp: +15163299814
website: https://wzardgarryspeedhac.wixsite.com/my-site-1

I am a crypto currency trader and i make over 200% daily trading all day and night and also by passing even when market is down and others are resting , If you are interested, I can teach you how to trade and also help you achieve your goal in life with crypto i can turn 4 btc into $340,000.00 in less than four weeks, now that bitcoin has high prices...please note that crypto currency trading is bitcoin unlike binary and Forex,bitcoin is traded for altcoins , bitcoin can also be traded for Ethereum, Litecoin, United States Dollar, Ripple, Euro, IOTA, and other stocks you need to put to trading on a daily basis with a very correct strategy and a target of profit as you get into the trading market with your capital. Also you can reach to me if you are new to bitcoin and to give you more info and guideline on how to invest smartly, this is opportunity life time knocking on your door ???? inbox me for more info....contact me on WhatsApp +1(206)-742-5358 or [email protected]

Its actually my pleasure to create this awareness of binary option(online) trade which i have invested in for years and was not profitable and encouraging until i got the best strategy for calculating the actual time to invest in other not to lose my money. now i make $15000 every week." make money from that strategy"for further information contact me on>>>>> [email protected] thank you
More
Breaking
Jul 15, 2021 (Thursday)